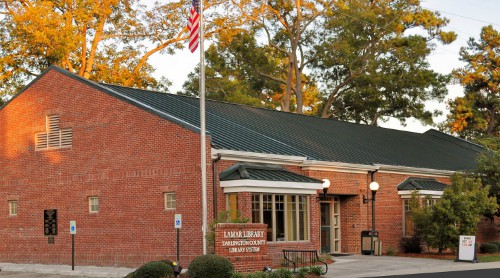 The Lamar Library is a branch of the Darlington County Library System. Located in the southern part of the county, it services the Town of Lamar and its outlying communities.

The Lamar Library officially opened its doors with a Dedication and Ribbon Cutting Ceremony on October 26, 2003 with a 4,200 square foot facility.

In 2010, the Friends enlarged the library by 1,000 square feet with the expansion of the meeting room and the addition of a classroom.  The project was funded in part by the Drs. Bruce and Lee Foundation and the meeting room was dedicated to long-time Lamar physician, Dr. Sidney T. Griffin on November 28, 2010.

The public areas of the Lamar Branch were remodeled and expanded by 1,000 in early 2015.  This project was made possible in part by a donation from the Drs. Bruce and Lee Foundation.